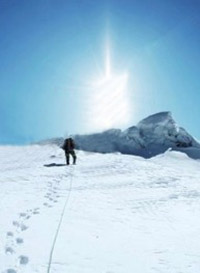 Self-blame plays no constructive role in the process of self-examination. Self-blame expresses disappointment in self and in our inability to make what we perceive as the appropriate response in a given situation; but consciousness can register a shortfall of this kind without the emotional drama of self-blame. And self-blame is emotional drama; it can also be a place of retreat from a more constructive response. We do not benefit from it, no matter how badly we screw up. Resolution is the better pairing with self-honesty, and a bit of humour can also be useful. After all, the angels are there to deal in perfection; human consciousness thrives on recognising and taking on the challenge of righting the wrong we perceive in ourselves and in the world as we push out the boundaries of awareness.

The point of people with a spiritual identity is that we are organising our lives around what we understand as higher values, and holding a space in which others can consider. The example we set, therefore, is of considerable importance to the credibility of those values; spirituality is not about perfection, but about learning. How we learn and the good grace with which we accept the lessons are part of the example we set. The most valuable thing we offer the world is the example of the ability to keep moving on; to keep grasping at the golden thread of consciousness; by working at those things which we know hold us back, individually and collectively, rather than giving up in despair or taking refuge in self-righteous indignation. This is the work of spiritual people. Our contribution comes, not from how much we know, but from what we do with courage and integrity in accordance with such knowledge as we have.

None of us knows how long we have. But we have never known this; we just assume that we have lots of time and expect it to be so. What we truly have is an opportunity to live today with gratefulness for the opportunity and pride in true effort to resist taking the line of least resistance into compliance, conformity and inauthenticity; and then, when the new chapter opens, to learn how to make happen those things that we say are important, which is the responsibility of spiritually-aware individuals. Otherwise what are we saying about the higher values? That we can only talk about them, but not live them? That we can only recoil from, but not deal with the world? What kind of example does that set? It is nearly as off-putting as that given off by smug, complacent people who KNOW. There have been a few of those around in recent years.

Many things are beyond us until we learn how to organise ourselves to achieve them. And if the test of 2012 has shown us nothing else, it has surely shown us that this is where the effort needs to go for the future. Although scant attention was paid to it in the New Age, the challenge of learning how to do, of integrating knowing and being, is as old as spirituality.

If you look up into the heavens on a clear winter’s night, those in the Northern hemisphere, at least, will see the constellation Orion dominating the sky. Orion’s belt, that line of jewels, which seems to divide the constellation in two, can be taken as a representation of the position of the Hierarchy at this time when, upon our planet, the higher is separating out from the lower. It is the bridge between the two.

The Hierarchy sees ands feels the sore place that disappointment is creating in the human heart.  That disappointment is with life for dealing with hard tests; with self for failing to perform in line with expectation; and with our spirituality for failing to make our lives other than they are. And they are preparing to deliver a response. Koruna Educational, based in Lapland, has committed to this.

So the work goes on. Keep open a space to hear and to learn.