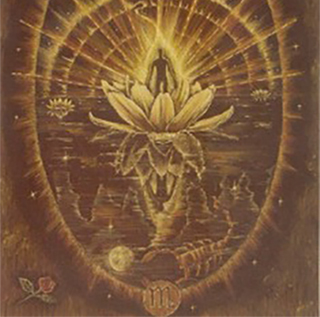 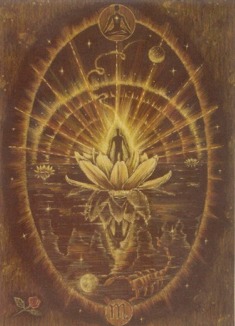 Pluto in Scorpio 1984-1995, Next Generation Up:
Part 4:
From the General to the Particular

It’s a fine line twixt above and below,
Sometimes we ascend, and sometimes we fall.
There’s a golden thread that unites us all,
And in the end, we come to know our golden self,
Our state of grace.

It is the way of esotericism to work from the general to the particular, and in this article which concludes the series on Pluto in Scorpio, we will consider the matter of the house placements of Neptune and Pluto in a horoscope, and how these areas of life, for as long as these two planets are in a sextile relationship, will provide footholds for the individual trying to climb out of the chasm opened up in personality life by Pluto.

Regardless of sign involved, the house in which Pluto is found in the natal chart is a place of instability and crisis in every life. These experiences are designed to open out awareness and release us, individually, from some aspect of the restriction formed from the conditioned assumptions with which we face life.

In this way, we each take on a small piece of the collective need to expand awareness.

The house (area of life) which Pluto rules, acts as the provocative agent for the challenging situations. To focus upon and explore the association between these two houses- the one in which Pluto is located and one which it rules - will shed light upon the way the Plutonian process is outworking in that individual’s consciousness and life.

In all probability, however, for the generation with Pluto in Scorpio (Pluto in its own sign), Pluto will also rule the house in which it is located. So the provocative agent is less clearly identifiable and there will be greater-than-average difficulty experienced in the process of recognising what is cause and what is effect, a relationship which relies upon separation in time and space, which the house frame accommodates.

This is why it is important for this generation to have access to those who can be objective for them.

The house occupied by the planet Mars, which is disposited by Pluto in Scorpio, should be considered as a stand-in in the agent’s role.

The house in which Neptune is situated, indicates the area of life in which a person will find the means of redeeming the suffering brought by Pluto, by losing self in the service of the ideal which expresses the highest of which we are capable.

Again, for those who have been brought up to focus only upon self and personal survival, this is an idea and an experience that will need to be introduced and unwrapped for them.

This is especially valuable for those with eating disorders and self-harming tendencies, which advanced individuals who are unconsciously searching for something to make sense of and to reconcile them to physicality, will often manifest. With anorexia nervosa, the awareness of the need to commit to something purposeful is very near the threshold of conscious, and the house occupied by Neptune represents the way on from this condition for those who can be encouraged to recognise that they are punishing themselves for being a purposeless lump of flesh.

These, then, are the important clues for those wanting (or needing) to know more about the mentality of their own generation or those of another, both collectively and individually.

This series may have been of no great interest to our regular readers who are not familiar with the language of astrology, but if followed, it may increase awareness of the value of astrology when it is used in conjunction with progressive concepts.

An astrology which uses prediction to stymie the Western mind with the predeterminist’s perspective, is no more helpful now than it was in the days when astrology earned itself a reputation as a dark art. We practitioners still battle against the fear this kind of astrology instilled. Many opportunities are lost because of it; but other opportunities could be made if there were a greater number of responsible workers in the field, especially at this time, to open a door to a higher level, for a generation which does not expect to find one.

DKF- Northernlight is now taking bookings for its summer teaching event which we are describing as an event for serious students of astrology and for spiritual seekers who might like to learn more about using the concepts underpinning Transitional Astrology, in the service of purposeful living.