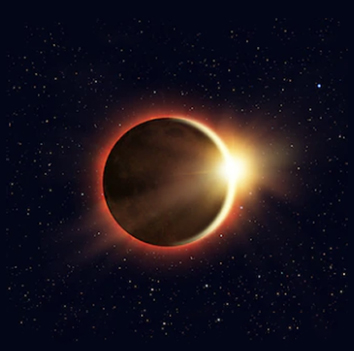 By the close of the month of July, we will have experienced three eclipses in thirty-one days: two solar and one lunar. In terms of eclipse allocations, July 2000 is at the top end of the scale. Three is the limit of what is astronomically possible in one month.

A fear of eclipses exists in the collective consciousness of humanity. What happens to the luminaries during an eclipse, particularly a total eclipse, has been expressed through myths across the ages and across the world, and it is notable that the coming together of the Sun and Moon in an eclipse is rarely presented as a felicitous occurrence.

Whatever psychological and spiritual truth those myths might embody, they are not the direct concern of astrology. Astrology’s concern is the inner significance of observable astronomical phenomena, and it makes no apology for the fact that these phenomena may be the product purely of a geocentric perspective which means that many of them would not exist for an observer in another part of our solar system. This is certainly true of  the phenomenon of solar and lunar eclipses.

So, let us consider what is involved in an eclipse.

Together, the Earth and the Moon are hatching another world, extending the chain of creation, taking consciousness into ever denser matter, still further away from the Sun. This is their ancient business. They have been about it for aeons. It is a development in which humanity cannot afford to get caught up any more than it is. It is this ancient alliance that we are fighting against through our conscious efforts and spiritual practices. Spirituality takes us up the down staircase put in place by nature. This is why it is such hard work and why chemically induced states of altered consciousness which avoid the transforming struggle count for nothing. Humanity is the only one of the four kingdoms in nature able to put up this fight. The consciousness which will exist in this new world will be below the threshold of human consciousness. Or at least, let’s hope it will be for a very significant majority.

During an eclipse, this involutionary creative alliance of the Moon and the spirit of the Earth is revealed. Things are forced into manifestation. This is what involution is, and this is the whole point about eclipses: they materialise what hitherto has existed only the subtle levels. They stand for involution, as does the number 666. It is the power to make manifest that humanity fears about eclipses, even if it does not understand why. Eclipses bring into manifestation things which hitherto were not perceived and which therefore, from the standpoint of the five senses, did not to exist to trouble us. Yet as the great exoteric astrologer Sepharial points out (and few would ever accuse Sepharial of reckless optimism) eclipses do not manifest merely misfortune: ‘It is generally believed that eclipses are uniformly evil. Nothing could be more erroneous. What is one man’s loss is another man’s gain and an eclipse that falls in good aspect to the benefic planets in a horoscope, will produce good to the native’ (2). But of course it is the case that the collective memory holds the shocks and the hurts tighter and longer. The Moon sees to that.

In this more spiritually conscious age, is there not a  more progressive view of eclipses to be had, one that takes the line that if it’s there in the psyche, whether that of our planet or that of an individual, it is better out? Of course! And every spiritually ambitious person will feel compelled to hold it. We spiritually aware people are very good at saying things are O.K. because we know they are, whilst quaking in our boots because, in fact, it is not our understanding! The function of boils and abscesses is to bring out impurities at the cortical level. They do us good too but few people enjoy them.

This dualism between our higher and lower aspects (and the situations it creates which are so embarrassing to our spiritual vanity) are part of being human. Let us at least acknowledge that. The higher and lower aspects of man are reflected in a division in certain energy centres in the body. At least we can give ourselves a good laugh (see Endnote 3).

Eclipses, boils and abscesses represent  extreme expressions of the principle which underpins the very experience of incarnating. On planet Earth we live amongst the consequences of  our thoughts and actions and gradually learn. Eclipses, boils and abscesses,  like incarnating,  release and reveal  that of which we have been unaware. The best response we can give is to look very carefully at what we are being shown. This is true on a global, national and individual level. If there were nothing there, it would not have to come out.

Eclipses bind in the energy of the planet in closest aspect to the luminaries.

At the level of the individual, this same principle holds true: the planet in the horoscope in closest aspect to the luminaries will determine the nature of the influence unless the eclipse falls directly on a planet. Then it will manifest in accordance with that planetary energy, moderated or accentuated by the planet in closest aspect.

The timing of  the climax of eclipses is something which needs calculating. We will look at these calculations next month.